Our backing track services are primarily for the singers who demand better quality custom production. We usually create those songs not found in stores. We’re not a Karaoke store selling the same tracks to everybody. Jazz, Big Band, Show, Orchestral and the more complex tunes take a little more time and will run more. Pro Tools sessions can also be sent! Each track is custom created for you personally. Your track will be unique and remain one of a kind. It will be copied exactly like the original, same key and everything unless there are custom instructions. Samples and references are available. Send an mp3 through e-mail of the song you want to do and we’ll get back to you. Our backing track services remain unbeaten to this day since we provide the highest quality at the lowest price within the music industry.

David got his start with piano lessons at age 9 and started his first local band “The Wanderers in 1965. Classically trained, the new 60’s Rock music like “The Beatles” was what got him excited and away from the stiff formal music upbringing. David was then hired by the biggest band in Montana in 1967 called the “Frantics”. Anybody growing up in the late 60’s would probably have seen them.The Frantics toured with the Who, Young Rascals, McCoys and “The Yardbirds” with Jimmy Page as Bass Player. He got to jam with Jimi Hendrix and met 2 of the “Beatles” in New York in 1968. They moved to Hollywood in 1969. Their album was produced by Gabrial Meckler on Ampex Records, (Steppenwolf & Three Dog Night fame) and they were managed by Robert Fitzpatrick. After the Frantics, David joined a new Band in Hollywood called “Whitehorse”. After becoming the leader, He hired guitarist Mick Mars now in “Motley Crue” who played with him for 5 years. Whitehorse played with Van Halen many nights on Sunset Strip in those days; they played about 300 nights a year. David and Mickwere always close friends. (See the web site B4dirt.com or read the Motley Crue Chronicles) for more story about that! In the “80”s he becamea technical expert to the stars while working in Hollywood music stores, becoming a product specialist for Korg Synthesizers in 1983. In 1985 he was hired as a synthesizer programmer at Motown by Willie Hutch and Berry Gordy. They had a top 40 billboard hit with Carrie McDowell, and that experience was the beginning of his own studio.

David signed with Floyd Records in 2006, and had a dozen songs with Earl Parker & Monique Wells that hit the top 40 Country Music charts. “David also Co-Produced and recorded Corey Leland’s music for “A Kids life” play which is a successful touring show in theaters around the country. Also, Corey’s critically acclaimed “The Insects Rock”. In 2007 Backing Track Express began. Now we send backing tracks around the World!

Now we've added Jenny Day to the team. She has a decade of experience in her Dad's studio. She is a fully accomplished Musician and Producer with 10 years on Pro Tools. Jenny started on the bass guitar at 12, learning classic rock tunes from Led Zeppelin all the way to Yes. After she became familiar with the essentials of music theory, she started getting into heavy metal. After working her way up to a percussionist in her middle school's orchestra, she performed for 3 years as a bassist in her high school's jazz band. Jenny graduated high school with a 4.0 grade average and won many awards for outstanding musicianship in band, choir and orchestra, She also has her metal band Valkyrium that plays in Hollywood on sunset strip! Currently she is enrolled in college and is near a degree in sound engineering and music production. She also study's T.V., film, and video game editing. Like her Dad, she recreates backing tracks by ear, fully recognizes chord progressions and writes Sheet Music. 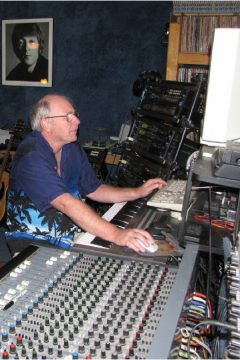